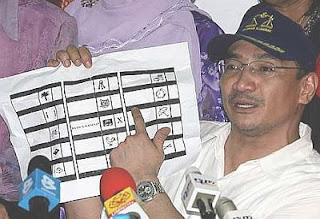 Indonesians go to the polls today.

If Malaysia's recent by-election ballot paper (as in The Star picture here) is XL-sized, Indonesia's would be much bigger as there are 12,000 candidates in the Indonesian polls or that's what I heard on tv last night. It may be true as according to Yahoo!, The ballot papers, listing 38 parties, are the size of a newspaper or roughly the width of a polling booth. There you go!

Indonesia is really a big country, so it's not surprising there are so many constituencies to cover.

From Wikipedia:
Indonesia comprises 17,508 islands, and with an estimated population of around 237 million people, it is the world's fourth most populous country.

Indonesia is the world's most populous Muslim-majority nation; however, no reference is made to Islam in the Indonesian constitution. Indonesia is a republic, with an elected legislature and president. The nation's capital city is Jakarta. The country shares land borders with Papua New Guinea, East Timor and Malaysia. Other neighboring countries include Singapore, the Philippines, Australia, and the Indian territory of the Andaman and Nicobar Islands.
Posted by HappySurfer at 3:08 PM

Email ThisBlogThis!Share to TwitterShare to FacebookShare to Pinterest
Labels: Indonesia