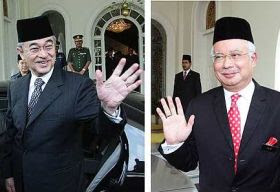 Prime Minister Datuk Seri Abdullah Ahmad Badawi (left) arrived at Istana Negara at 9.59am this morning for an audience with the King, Yang di-Pertuan Agong Tuanku Mizan Zainal Abidin, and left at 10.57am.

Datuk Seri Najib Tun Razak then arrived at the palace at 11.20am to meet the King and left at 12.15pm.

Deputy Prime Minister Najib Razak is expected to be sworn in as prime minister on Friday in a planned power transition that has been one year in the making.

Abdullah, who became the Malaysia’s fifth premier in October 2003, was pressured to step down after the ruling National Front (Barisan Nasional) coalition suffered its worst results in the March 8 general elections last year when it lost its two-thirds majority in Parliament.

My hope is for a better Malaysia.

Pak Lah is ready to move on
Najib to be sworn in as PM tomorrow
Posted by HappySurfer at 3:33 PM