The Flu situation in Malaysia

You can run but you can't hide. This is exactly what the world is facing now with regard to the Influenza A(H1N1) situation.

In Malaysia, The Star reported today that health authorities have confirmed five more cases of “imported” Influenza A (H1N1), bringing to 17 the number of confirmed cases in the country. *sigh*

1. A 12-year-old boy who had spent five days in Manila before arriving here on Saturday on board Malaysian Airline flight MH705 (seat 15E).

2. A 25-year-old British tourist arrived last Monday via flight EK342 from Dubai, spent a night in a hotel in Kuala Lumpur before proceeding to Pulau Tioman via Berjaya Air J8190 (seat 5A) on Tuesday.

Both cases were confirmed positive on Sunday

3. A 16-year-old student from Melbourne arrived here on Saturday at 7.30pm on board Jet Star Airline 3K687 (seat 4A) from Singapore and records showed that he had travelled from Melbourne to Sydney on Tuesday before flying to Singapore on Friday via Qantas QS319 (seat 30D).

4. A 14-year-old American schoolgirl who arrived in Kota Kinabalu onboard MH385 on Saturday at 6.10pm and was referred to the Queen Elizabeth Hospital after screening showed she had symptoms of the flu.

5. A 26-year-old woman who had gone to Melbourne for a holiday. She had arrived from Melbourne on Saturday via Air Asia X D72723 at 7.15am and went to the Sungai Buloh hospital for treatment on Sunday when she developed a fever.

All three cases were confirmed positive for the flu yesterday.

Health authorities are currently tracing crew and other passengers of flights J8190 which arrived in Pulau Tioman at 4pm on June 9, MH705 which arrived at KLIA at 7.05pm on Saturday and Jet Star Airlines 3K687 which arrived 25 minutes later.

The authorities are also tracing the crew and passengers of flights MH385 which arrived in Kota Kinabalu on Saturday at 6.10pm and Air Asia D7 2723 which arrived at the LCCT on Sunday at 7.15am.

Summer is a time for travel and holidays. Even though there is no restriction on travel, the flu threat might keep more people at home. Todate, I have not seen a single person in Kuala Lumpur with a mask on which could be a good indication that the flu is not on the streets though we have been advised to wash our hands regularly and refrain from shaking hands, if possible.


When was the last time you received a love letter? Never ever? Well, here is one for you. Hmm... I wonder if people still write like that.. Do you? Would you? 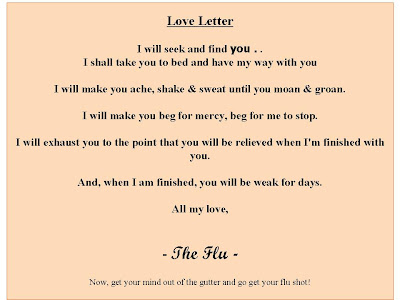 Posted by HappySurfer at 4:08 PM