Gosh! You must be so bored with my updates on the H1N1 flu. I apologise. For some strange reason, I'm keeping tab on its spread for my own awareness and if you find it useful too, I am glad. If otherwise, do what you please. Hey, it's Summertime!

Looks like Melbourne deserves the title of H1N1 center or something to this effect as yet another returning student came back from Melbourne with the virus. This makes it the 70th case in the country.

Johor has reported its first confirmed Influenza A (H1N1) case of a 19-year-old female student who returned from Melbourne via Changi Airport Singapore on flight SQ0238 on June 22.

She is now being treated at Hospital Sultanah Aminah while her family members and the taxi driver have been placed under home quarantine for a week.

The student’s 16-year-old brother is from Sekolah Dato Jaafar while her 17-year-old sister studies at SMK Infant Jesus Convent.

The Health Ministry has urged students returning for holidays from the United States, United Kingdom, Australia and the Philippines must quarantine themselves at home for seven days as most imported cases of the Influenza A (H1N1) reported in the country involve people who returned from these countries.

The number of cases nationwide has increased to 69 with 10 new cases, two of which are local transmissions.

Meanwhile, the Seri Cempaka International School in Batu 9, Cheras in Kuala Lumpur became the fourth school to be ordered to be closed for a week after a student tested positive for the flu. 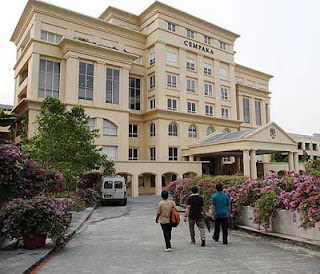 SJK (C) Jalan Davidson here and SRK Assunta 1 and 2 in Petaling Jaya were closed earlier after students were confirmed with the virus.

SMK Seksyen 9 Shah Alam, SMK Damansara Utama in Petaling Jaya and SM Wangsa Maju in Kuala Lumpur have each had one class stopped from Monday.


In the ASEAN region..

MANILA: The Philippine House of Representatives suspended operations Tuesday for five days after news that the country's first swine flu-related fatality worked at the legislature. The legislature building will be sanitized.

Australia reported its second swine flu-related death - the third for the Asia-Pacific region.

The Philippines confirmed 28 more infections, bringing the country's total to 473.

In Australia, a 35-year-old man with a range of medical problems died in a Melbourne hospital Saturday after seeking help for a flu-like illness Friday, an official said.

On Friday, a 26-year-old man with multiple ailments including swine flu died at a hospital in the southern city of Adelaide.

Authorities are not certain in either case that swine flu was the main cause of death.

Australia had 2,733 confirmed cases of swine flu by Tuesday.

Chinese authorities issued a plan for schools to contain future outbreaks as 27 more infections were confirmed, bringing the mainland's total to 441 cases.

The ministries of health and education said that if an outbreak spreads through a school and affected surrounding areas, classes in all schools in the area should be suspended.

Cases where only one classroom has been affected would trigger disinfections and daily health checks at all schools in the area.

New Zealand confirmed another 61 cases of swine flu, taking to 364 the tally of cases nationwide.

The World Health Organization has declared a flu pandemic. As of Monday, it said more than 52,000 cases had been reported worldwide with 231 deaths, mostly in Mexico and the United States.

Source: The Star
Posted by HappySurfer at 12:56 PM