Latest Update on the H1N1 flu in Malaysia

Go here for the latest update on the flu situation 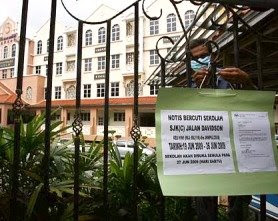 This is a picture of the first school in Malaysia to be closed until June 26 after an 11-year-old student tested positive on Friday for the Influenza A(H1N1) and the virus was also transmitted to two classmates. It is a Chinese national type primary school at Jalan Davidson. Another eight new cases were reported Sunday bringing the total to 50 cases.

Meanwhile, several Asian countries have ordered mass school closures, some in the thousands, to stem outbreaks of the Influenza A (H1N1) virus.

- The Hong Kong government has closed all primary, kindergarten, nursery and special schools since last week after the Chinese territory recorded its first case of the virus.

- Japan has closed 4,466 schools in six prefectures, mostly primary schools, kindergartens, junior, according to its Ministry of Education, Culture, Sports, Science and Technology.

- Thailand has authorised schools to suspend classes if necessary, without seeking the Education Ministry’s permission.

- The Philippines, which has suspended classes in 11 schools and universities after detecting one case in each, told school authorities to report any influenza-like illnesses among their students, especially those who have recently travelled to affected countries.

The Director-General of Health advises students on what they can do to curb the spread of the flu.

Students returning from vacation in countries affected by the Influenza A (H1N1) virus to seek immediate treatment if they have cough and fever and to limit their interaction with friends, including avoiding classes until they get better.

The D-G urges the public to cooperate with the authorities by postponing their travel to countries hit by the flu, “and travel only if absolutely necessary” as the chances of contracting the virus when flying to an affected country has increased, whether traveller is in that country or during the flight there.

These are the numbers (03-8881 0200 and 8881 0300) to get in touch with the Health Ministry should you come in contact with those who had been tested positive for the flu virus, including passengers on the same flight and crew members.

The public can follow the latest developments on the flu outbreak via the ministry’s website at www.moh.gov.my.


Here is the latest update on the H1N1 situation in Malaysia - June 23 update.
Posted by HappySurfer at 10:28 PM