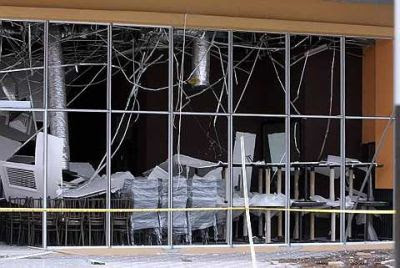 At a glance, this could pass for being a piece of artwork, but it is not. It is the aftermath of a gas explosion that occurred inside a new AEON Jusco outlet in Malacca. Reported to be the largest AEON Jusco outlet in the country, it is slated for opening on Thursday, day after tomorrow.

The force of the blast blew a 2m-wide hole in the building’s wall, showering glass and debris over a 25m radius and causing a small fire.

The explosion killed a 25-year-old supervisor and injured 16 others - seven with serious injuries, three in critical condition.


Source: The Star..Supervisor killed in gas explosion
Posted by HappySurfer at 10:08 PM