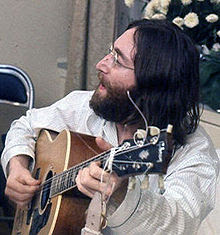 Yesterday, exactly 29 years ago on Dec 8, the world was stunned by news of the killing of one of the greatest musicians of our time, John Lennon.

On the night of 8 December 1980, at around 10:50 pm, Mark David Chapman shot Lennon in the back four times in the entrance of the Dakota apartment building. Earlier that evening, Lennon had autographed a copy of Double Fantasy for Chapman, who had been stalking Lennon since October.

I'd like to pay tribute to this great musician and a funny man, John Lennon of The Fab Four, The Beatles.

Below are a few videos of their concert held on the rooftop of Apple Studios on Abbey Road. The lunch-hour concert lasted for just a few numbers before the cops arrived to stop it due to complaints received about the disturbance.

A little sidetrack here, Astro this month is showing 'Across the Universe', a contemporary musical of all Beatles songs and there's even an imitation of the rooftop concert scene. Good storyline and good singing too plus a look at life in the '60s. If you have Astro, go watch it. It's on HBO. I caught it a few times. Yeah, that's how much I like their songs. The Beatles forever!!

Oops! I've said more than enough already, so here are the videos. Enjoy..


This was the last song before the cops arrived to stop the gig. This performance was just days after the song was written so the guy is actually holding up the lyrics.


Of course, we can't forget this inspirational song of John's - Imagine. I wonder if he were to be alive today, for all the peace he was advocating, would he step up to be the world's peacemaker between warring nations. But we will never know, will we? We can only Imagine..


Give this sexy cover of "Be My Baby" by John Lennon a listen too..

(Acknowledgement: Thank you, YouTube and the people who are posting these wonderful videos. You are helping to preserve history.)
Posted by HappySurfer at 2:18 PM

Email ThisBlogThis!Share to TwitterShare to FacebookShare to Pinterest
Labels: Music videos, The Beatles