The French are Lighting Up in Public Again..

Strange that I had this post on ciggies written up yesterday. There is an announcement today that Cigarette prices go up on Jan 1.

So, is this price increase good news or bad news for you? 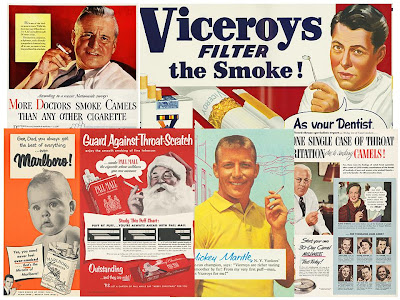 Take a closer look at these tobacco ads. See anything amiss? Doctors and a dentist are promoting cigarettes. Santa is on the scene too, an athlete as well. Even baby is getting into the action.

Fortunately, these are old tobacco ads otherwise, we'll be seeing some serious protests and picketing on the streets and in front of government offices.

Three years after France outlawed smoking in public places, The French Are Lighting Up in Public Again..

Interesting stats in France: Studies show that complaints by people of exposure to second-hand smoke at work, which dropped from nearly 43% in 2006 to just 9% the following year, has now gone back up to 21%, according to Non-Smokers' Rights (NSR).

The reason? Widespread government enforcement of the law never materialized as expected, leaving employers and workers less worried about being fined nearly $200 per infraction. Some employees now light up at their desks or by the coffee machine instead of joining their shivering colleagues outside, and many bosses turn a blind eye to it.

Email ThisBlogThis!Share to TwitterShare to FacebookShare to Pinterest
Labels: health