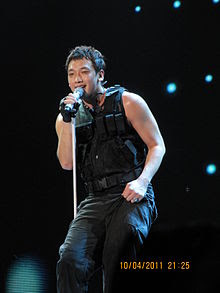 Who do you think made it into TIME's list of 2011 most influential people in the world? Official voting for inclusion on the TIME 100 list has now closed with Rain is the 2011 readers' choice. You read right. Rain, the Korean pop superstar actor has been voted the most influential person in the world by readers in an online poll conducted by TIME magazine.

Rain received the highest number of votes among the 204 candidates with 439,251 people voting for him. He has been making the TIME 100 online list for six straight years since 2006.

UPDATE on Apr 22, 2011:
TIME's official list is out. The South Korean pop star turned actor Rain, 28, took the top spot in the TIME 100 reader poll for the third year, trouncing competitors from Barack Obama to Lady Gaga. That's pretty impressive online power for a guy whose main claim to Western fame is a role in the 2009 film Ninja Assassin. View photos of Rain..

Let me just single out two categories that might interest you.

For bloggers, here are the top 5 blogs that readers voted.

Though official voting for inclusion on the TIME 100 list has now closed, users can continue to vote for their favorites until the final list, selected by TIME editors, is revealed on Thursday, April 21st.