I love eggs, cooked any way. But the latest news on fake eggs is giving me the jitters. A report on fake eggs was made by a homemaker in Penang and the authorities have seized some eggs from a few egg stalls in the market to aid in investigations. Results are pending.

The homemaker said that the eggs did not smell like real eggs and were tasteless. They were also of unusual shapes and larger than real eggs. The fake egg also had a rougher surface than the genuine one.

When cracked, there was no sign of chalaza, the structure inside the egg that keeps the yolk in place and the fake egg white and yolk quickly mixed together, unlike that of real eggs.

Now tell me, would you be able to tell the difference between fake and real eggs if they were not labelled in the image below? Frankly, I couldn't. Take a look.. 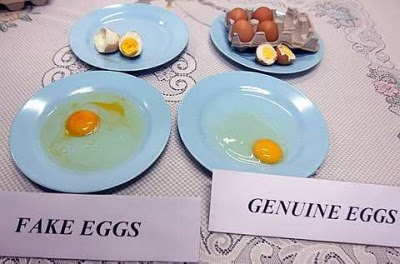 The fake egg yolk (left) is more yellowish than that of a normal egg. 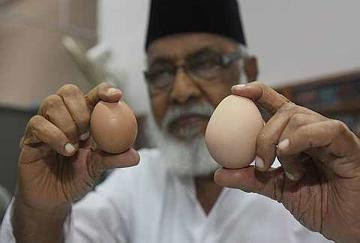 The fake egg is the one on the right.

Watch this video made by CAP, Consumer Association of Penang, watchdog organization for consumers.

In fact, this fake egg thingy is not new. I remember receiving a forwarded email some years ago on fake eggs in China. It also includes instructions on how to make them. It was an eye-opener, to say the least. Is it a hoax, do you think? For more information, you can read the following

Related articles:
Homemaker shocked over ‘fake eggs’ find
Cracking the fake egg scam
Rumour of fakes on the Net
Fake eggs sold in China for the last 10 years!
Fake eggs is a myth

And finally, why wouldn't the chicken cross the road? He has to go see for himself whether he is being robbed of his job. Poor chicken!


Source: The Star
Posted by HappySurfer at 12:13 PM