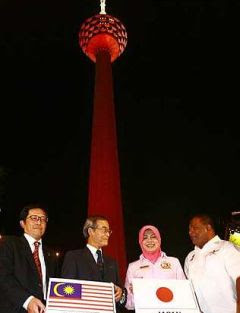 If you have noticed KL Tower bathed in a different color from the usual yellow and blue, it is because it is showing its support for victims of the recent Japan 9.0-magnitude earthquake and tsunami.

The initiative, launched by Japan’s ambassador to Malaysia Masahiko Horie, is a joint effort with nine iconic towers in raising awareness for the earthquake and tsunami victims by lighting up their towers in the same colours, i.e., red and it mast white - as seen in the image here. The lighting starts nightly from 8pm to midnight until May 4.

Other participating towers around the world include the Empire State Building in New York, CN Tower in Canada, John Hancock Observatory in USA, Macau Tower in China, North Tower in South Korea, Olympic Tower in Canada, Sky Tower in New Zealand, Space Needle in USA and Spinnaker Tower in England.

Besides the lighting of the tower, KL Tower is also be placing a donation box at its ticketing counter.


Source: The Star
Posted by HappySurfer at 3:32 PM