It is common knowledge that a hundred Ringgit doesn't buy us much these days. Our poor purchasing power sees to that.

The Malaysian Insider did a check on salaries and prices in selected developed country cities and results show that despite being touted as one of the world’s least expensive cities, KL residents pay as much or even more for chicken, broadband, cars and mobile phones as a percentage of their income.

Communications, for example, is one area where Malaysians are paying notably more than residents in developed countries even after currency conversion.

The same study shows that on average, KL residents have to work 22 minutes to afford a loaf of bread as compared with 18 minutes in Los Angeles, 16 minutes in Sydney, 15 minutes in Tokyo and 12 minutes in Zurich. 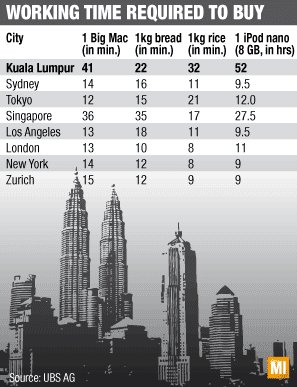 Wait, there is more..

A Honda Civic in KL costs about RM115,000, or 20 times the average monthly salary of an auditor.

In Melbourne and London by comparison, a Honda Civic costs AUD25,000 and GBP19,000 respectively, or only about three times the average salary of an auditor in those cities.

The high cost of cars is part of the reason that Malaysians have leveraged themselves to a record 76 per cent of the country’s GDP.

Bank Negara statistics show that at the end of last year, 20 per cent of Malaysian household debt was due to cars, an asset which depreciates over time.

All this from TheMalaysianInsider..
Posted by HappySurfer at 10:18 PM