Thanks to Google (yet again), we all know a little bit more about the ice cream sundae. Today is the 119th anniversary of the first documented ice cream sundae. If you use Google.com today, you would see this pretty doodle. 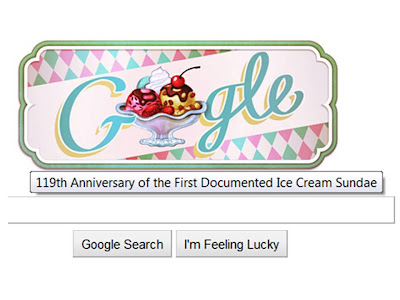 With the advent of Sundae, ice cream is never viewed in the same light again. The Sundae, this appetizing ice cream dessert typically consists of a scoop of ice cream topped with sauce or syrup, and in some cases other toppings including chopped nuts, sprinkles, whipped cream, or maraschino cherries. 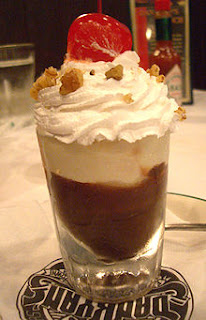 You can practically create your very own sundae with the many toppings and syrups available or make one from the already famous sundaes such as the Classic Sundae, Hot fudge sundae, Brownie sundae or a Banana Split.

The Classic Sundae is the original sundae. It is vanilla ice cream topped with a flavored sauce or syrup, whipped cream, and maraschino cherry. These sundaes are typically named for their flavored syrup, cherry sundae, chocolate sundae, strawberry sundae etc. Soft serve ice cream is often used instead of regular ice cream.

And finally, the most expensive ice cream sundae in the world is at a price of 1,000 U.S. dollars. It is the Serendipity Golden Opulence Sundae, sold by Serendipity 3 restaurant in New York City. The dessert consists of five scoops of Tahitian vanilla bean ice cream infused with Madagascar vanilla, covered in 23-carat edible gold leaf, rare Amedei Porcelana and Chuao chocolate, American Golden caviar, passion fruit, orange, Armagnac, candied fruits from Paris, marzipan cherries, and decorated with real gold dragées. The sundae is served in a baccarat Harcourt crystal goblet with an 18-karat gold spoon.

Back to reality, what's your favorite ice cream sundae?