Sai Baba passes away in India 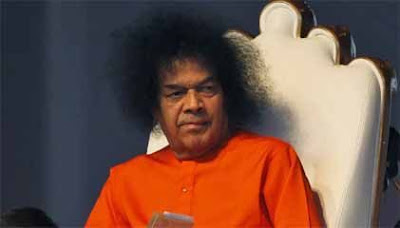 Sathya Sai Baba, considered a living god by followers, has died. He was 86.

According to Wikipedia, Sathya Sai Baba was admitted to the super-specialty hospital at Prashantigram at Puttaparthi on March 28, 2011 following respiration-related problems. After many days of hospitalization where his condition progressively deteriorated, he passed away on April 24, 2011 at 7.40 am (IST).

I remember a former colleague made a trip to one of his temples in India. She and many others waited for days in order just to get a glimpse of the great guru. Not sure if she ever saw him.

On 8 March 1940, while living with his elder brother Seshama Raju in Uravakonda, Sathya was apparently stung by a scorpion. He lost consciousness for several hours. Within the next few days there was a noticeable change in Sathya's behavior. There were "symptoms of laughing and weeping, eloquence and silence." "He began to sing Sanskrit verses, a language of which he had no prior knowledge." Doctors believed his behavior to be hysteria. His parents brought Sathya home to Puttaparthi. Concerned, they took him to many priests, "doctors" and exorcists.

On 23 May 1940, Sathya called household members and materialized sugar candy and other items. His father became furious upon seeing this, thinking his son was bewitched. He took a stick and asked him who he was. To this Sathya announced calmly and firmly "I am Sai Baba," a reference to Sai Baba of Shirdi. He proclaimed himself to be a reincarnation of Sai Baba of Shirdi — a saint who became famous in the late nineteenth and early twentieth centuries in Maharashtra, and who had died eight years before Sathya was born.

May he rest in peace.. 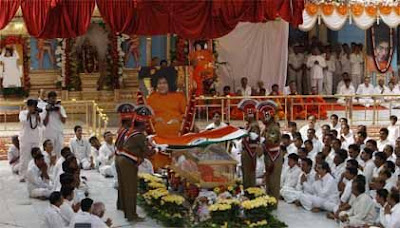 Image source: The Star
Posted by HappySurfer at 2:59 PM

Email ThisBlogThis!Share to TwitterShare to FacebookShare to Pinterest
Labels: India