Sexy and I Know It - in Hakka 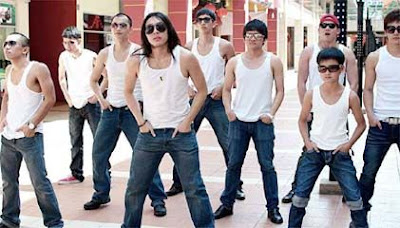 Now, here's another local video that has gone viral on You Tube.

A Sabah-made Chinese New Year video greeting in Hakka (a Chinese dialect) is the latest clip to have gone viral with close to 300,000 views within 10 days. It's now at more than 330,000 and counting.

Directed by photographer-cum-artistic dance assistant, Skyler Liew, the music video was filmed at various locations around the city a day before Chinese New Year. The 3.35-minute video posted on YouTube was shot using a Pentax DSLR camera featuring a group of nine people including a 13-year-old boy, donning white singlets, blue jeans, black boots and sunglasses, dancing to a parody of the American electro pop duo LMFAO's song and video, Sexy and I Know It. The main singer in the clip is 21-year-old Helmsly Chong Jin Fu.

A cool video, ada standard. Give it a view, at the very least, you'll get a glimpse of how Sabah (Kota Kinabalu) looks like.

Posted by HappySurfer at 9:01 AM