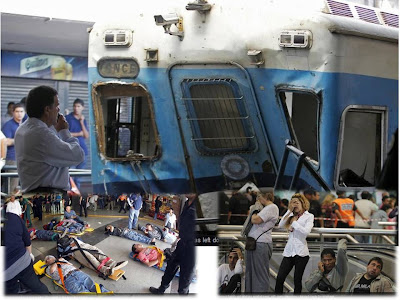 Oh dear, another crash disaster. This time it's a commuter train crash in Buenos Aires, Argentina.

According to officials, at least 49 people have been killed and more than 600 injured in the worst train crash in Argentina in 40 years.

The train hit the end of the platform at Once station in the capital Buenos Aires during the morning rush hour. Dozens of people were trapped for hours in the wreckage but all have since been taken to safety. Two days of mourning have been declared and planned carnival festivities in the country have been cancelled. 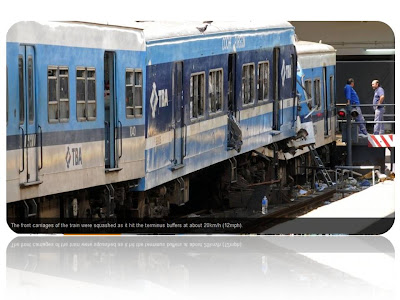 The front carriages of the train were squashed as it hit the terminus buffers at about 20km/h (12mph).

Unlike here in Malaysia, train lines in Argentina are not state-owned and many parts of Argentina's rail network are antiquated and in need of repair. This incident will increase concern about lack of investment in the system.

In September 2011, 11 people died when a commuter train in Buenos Aires hit a bus crossing the tracks and then hit a second train coming into a station.

This latest accident is Argentina's worst train crash since February 1970, when a train smashed into another at full speed in suburban Buenos Aires, killing 200 people.

Posted by HappySurfer at 2:35 PM