More violence in the world.. and from a sporting event! Sad. 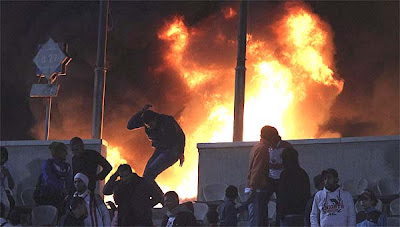 The image shows a soccer fan fleeing from a fire at Cairo stadium yesterday, February, 1, 2012, after violence broke out when home team fans rushed to the field celebrating the home team's unexpected victory against Al-Ahly, Egypt’s top team. 70 people have been reported dead with 1,000 injured. This happened in a Mediterranean port city, Port Said.

According to a health ministry official who told state TV, most of the deaths were caused by concussions, deep cuts to the heads and suffocation from the stampede.

This is the worst incident of soccer violence in Egypt and the deadliest worldwide since 1996 in which at least 78 people died and 180 others injured in a stampede at a stadium in Guatemala City before a World Cup qualifying match between Guatemala and Costa Rica.
Posted by HappySurfer at 10:38 AM