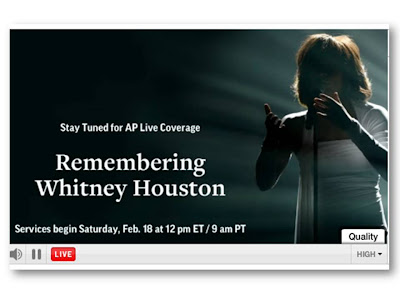 The family of Whitney Houston does not plan to open the funeral service for Whitney Houston to the public. Attendance to the private funeral will only be by-invitation only to close friends and family. Also spotted at the funeral home (Whigham funeral home in Newark, N.J., on Friday) : Houston's mother, Cissy Houston, Dionne Warwick and Clive Davis, among others.

However, Associated Press has been allowed to have a camera at the venue for livestreaming for fans around the world to bid farewell to the pop star.

In New Jersey, Governor, Chris Christie has ordered flags flown at half-staff at state government buildings on the day of the funeral amid a number of complaints registered in emails and other messages.

The Governor answered his critics by saying that he was not claiming Houston was a role model, but that she deserved the tribute because of her huge cultural impact and as a famous "daughter of New Jersey."

Fans who want to bid Whitney Houston farewell will also be able to watch her private funeral on E! - Whitney Houston Memorial Live. In Malaysia, it will be on Astro Ch 712, 1:30am, Sunday.

Aretha Franklin and Stevie Wonder have been reported that they would sing at the funeral. Kevin Costner, her co-star in The Bodyguard, and Clive Davis, the person who discovered Ms Houston and a close friend are expected to speak at the funeral. The eulogy will be given by gospel singer and longtime family friend, Marvin Winans.

Whitney Houston was born in Newark. She died in Beverly Hills, Calif., on Saturday at the age of 48. Her body was flown back to her native New Jersey on Monday.

Livestream of funeral at http://livestream.com/aplive
Posted by HappySurfer at 6:59 PM