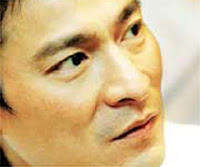 Yesterday, in Bukit Jalil, caution must have been thrown to the wind (for curious persons) as fans of Hong Kong superstar was hoping to get a glimpse of their idol, Andy Lau Tak-Wah.

It was the funeral of a late Mr Chu whose daughter, Carol Chu, whom Andy Lau has been having a relationship for the past 24 years. A wedding was scheduled for April but was called off due to (get this) news of the nuptials being leaked out.

Check out the picture of the funeral procession below. Notice bodyguards with large silver umbrellas shielding a person from photographers. According to Chinese custom, the son-in-law of the deceased must walk in front of the hearse, but it could not be confirmed if the shielded person was Chu's long-time partner, Hongkong superstar Andy Lau. 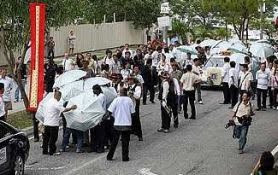 Although no one has been able to confirm if the person being shielded was Andy Lau, it is believed that the Hong Kong superstar has been at Carol’s family house in Bukit Jalil for days.

Family members and those who attended the funeral were told not to carry their mobile phones to protect his privacy.

A neighbour of the family claimed that she saw a female teenager at the procession, giving rise to speculation that she could be their daughter. 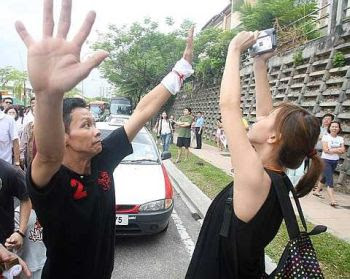 No pictures please: Video taping the funeral procession is a no-no and this bodyguard is intent on carrying out his duties.

Me? I just want to be little ole me...to be able to go anywhere I please and be just who I am. Bliss..


Source: The Star..‘Son-in-Lau’ goes under cover at Chu’s funeral

Related articles:
Andy Lau - Popular Keyword
Quite a ‘scene’ at funeral of Chu’s dad
Posted by HappySurfer at 12:10 PM