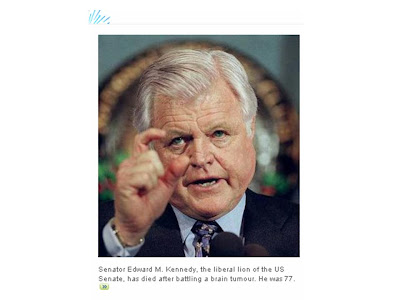 Senator Edward M. Kennedy, the liberal lion of the US Senate, has died after battling a brain tumour. He was 77.

For nearly a half-century in the Senate, Kennedy was a dominant voice on health care, civil rights, war and peace, and more.

To the American public, though, he was best known as the last surviving brother of a storied political family.

Kennedy was elected to the Senate in 1962, when his brother John was president, and served longer than all but two senators in history.

Over the decades, Kennedy put his imprint on every major piece of social legislation to clear the Congress.


Senator Edward M. Kennedy of Massachusetts, a son of one of the most storied families in American politics, a man who knew triumph and tragedy in near-equal measure and who will be remembered as one of the most effective lawmakers in the history of the Senate, died Tuesday night. He was 77 .
Continue reading..Edward Kennedy, Senate Stalwart, Dies - NY Times 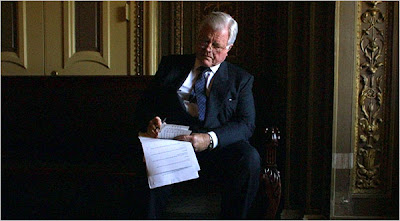 Posted by HappySurfer at 2:15 PM