If you do a search on google.com today, you will come across this Google logo. And if you just mouse over the logo, it says Perseid Meteor Shower.

Yes, we are now in the midst of a meteor shower, Perseid's and today, August 12, is actually around the peak of the shower. According to Wikipedia, The shower is visible from mid-July each year, with the greatest activity between August 8 and 14, peaking about August 12. During the peak, the rate of meteors reaches 60 or more per hour. They can be seen all across the sky, but because of the path of Swift-Tuttle's orbit, Perseids are primarily visible in the northern hemisphere. 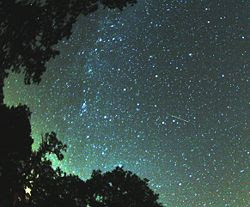 Latest from The Star: Malaysians will be able to sight up to a total of 100 Perseid meteors per hour streaking across the northern sky in the wee hours of Thursday morning. The meteor shower is expected to be best viewed from 1.30am to 4am on Thursday.

Those who miss tomorrow’s meteor shower may still catch a “lesser version” after midnight Thursday, or early Friday morning.

The meteor shower can be observed with the naked eye.
Posted by HappySurfer at 11:37 AM